After breakfast this morning, Byron suddenly started singing through the ABCs without prompting.  It's a bit rough and garbled in parts but very cute.  They must be working on this at Daycare (yeah daycare!). Bob said he didn't know the ABC song until after he started Kindergarden (his Mom will have to verify that).  I tried to capture it on video several times and finally got it.  Here's one from the AM.  You will need to turn your volume way up to hear it.

I showed this video to Byron and he wanted to watch it over and over!
Here's one from dinner time:


Byron also had a great therapy session at home today with his Physical Therapist Kathy Schlough.  As most of his therapy is at daycare, I captured some of today's session on video to keep track of his progress.

Here's Byron putting together an airplane.


Attempting to pick up a small plastic shape.  The use of his left hand has regressed somewhat from the height of his constraint therapy progress as you can see here, but he's still a real trooper!

Byron at the foot of the bed but still IN the bed.  Flipped him over and put him up at the head of the bed where the rails are.  So far so good....
By Denise Thomas Pratt - October 25, 2009 No comments:

The next phase in Byron's life has finally arrived - bye bye crib, hello big boy bed!  This is a developmental phase but also a necessity.  I leaned on his crib railing one too many times and it snapped in the middle.

Byron is two and a half.  The timing is right to convert the incredible three way convertible crib to it's next stage.  A couple of days ago we began to look for the stored old parts.  The problem was, we couldn't find the toddler side guards that came with the crib.  So we simply removed the broken side and voila - a toddler bed! 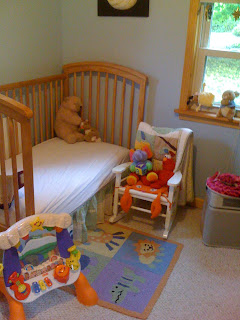 Off Byron went to his converted bed, completely nonplussed.  (Jeapordy theme music here) This is what I found the next morning at 7:00 am. 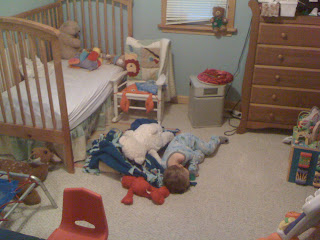 Bob and I asked him when he woke up if he had fallen out, and he told us that he had.  We think it's more likely that he just discovered that he could get out of the bed in the middle of the night, and then didn't bother to get back in.  Climbing is not his specialty after all, and this crib at it's lowest setting is pretty high off the ground.


HMM...  I got on Craig's list and found a listing for a nice toddler bed with side guards in Syracuse.  We went up this morning, got the bed, had a nice brunch, took a much needed side trip to Babies'r'us - home by 1 o'clock.  It's 8 o'clock pm now and so far so good.  Byron seems to like the new bed and can climb in and out of it easily.  I put him to bed at 7:00 and so far he hasn't opened the door and walked out so maybe we're on our way! 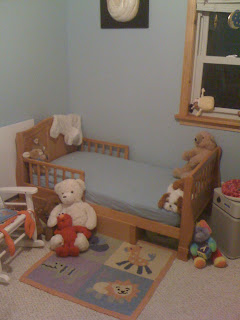 What happened to our sweet boy?

Byron is two and one half and the trying twos have begun.  Three of Byron's four therapists have pulled me a side, independently, and said that Byron is really acting up; throwing things, hitting, not following directions.  His teachers at daycare, who were MADLY in love with him week one, today didn't even greet him when he walked in.  Byron sort of skulked off to the side and ignored everybody.

Byron is undergoing a lot of change right now.  He has been an only child, the center of everyone's attention, had one on one focus from his therapists since he was three months old, and recently returned from Kennedy Krieger where he had three therapist's attention at once.  He is used to being the Golden Boy, the one who draws the focus of a room.  Now he is one of twelve, loud, rambunctious kids, all way more socialized than he is, vying for the attention of three overworked teachers.  Poor guy!

When I arrived to pick him up today, he was madly flirting with one teacher, while the other kids were all listening to a story.  She was buying it, flirting right back. I could see that he was back to his old tricks, with a new scheme, divide and conquer.  And it was working.  I asked his main teacher how his behavior was today and he said "Much better!"  I'm keeping my fingers crossed, because if all goes well, by January he will be in school every day from 8-2.  I strongly feel that this socialization is the next very best step for him.  Even if he doesn't like it at first.
By Denise Thomas Pratt - October 21, 2009 No comments:

Our good friend Chandika is very happy about her new iphone.  She was using it today to try to capture some video of Byron.   Pretty cute.

Turn up your volume and don't blink or you might miss this one: Pop Goes the Weasel.


In this one we see the beginnings of the future DJ JAM Byron: 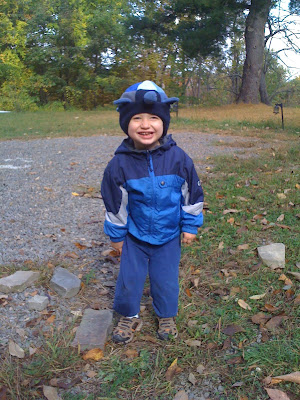 Here I am back at the blog again.  I will try to post a couple of times a week.  Byron simply loves his daycare.  Coincidentally his teacher, who is a wonderful local musician, is also a practitioner of Siddha Yoga and regularly visited the Ashram.  His wife has been involved since 1973.  Byron seems to attract people from Siddha Yoga.  His service coordinator, the woman who saved our life when Byron was first diagnosed by coordinating all his therapy and getting us some much needed family therapy, was also a frequent visitor to the ashram. Cool!

The big news is that Byron will most probably begin preschool on January 3rd.  Yep - pre School with a capital "S" at the local elementary school.  The class will have six special needs kids and 6 "typical" kids and will be from 8am - 2pm every day.   The kids are allowed to rest after lunch so Byron shouldn't get to worn out. He will only be 2 years and 9 months old after all.   He will be in this class right up until Kindergarden in 2012 and then will transition to Kindergarden at the same school.  The school is only 1.5 miles form our house so I will drive him there every day.  The reason why I say he will "most probably" start there is because he has to have a final approval meeting on December 2 to get all the ducks in a row.  But everyone thinks it will go through just fine.  It is unprecedented for the public school to have an opening in this very sought after class in January so we are very lucky - the head of the early childhood program in Ithaca said that it must be Byron's "Karma" - I think so!

Byron will also receive all his therapy appointments in this class, but with different therapists.  We will be very sad to leave this wonderful group of therapists/friends that have guided Byron through his milestones with such love and tender care.  But I'm sure his new therapists will also be wonderful and can't wait to meet them.  His care will now be coordinated by the School District until Kindergarden and then I'm not sure what happens after that.  More soon!
By Denise Thomas Pratt - October 15, 2009 No comments:

Well maybe not the first day of school, but I dropped Byron off at his first day of daycare, which is in a school. Here's a snapshot and some video of him entering. 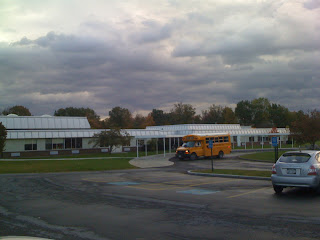 When we got there we ran into the Stacey, one of the Mom's from our special needs group. Her daughter and son are there too. Byron's occupational therapist Pam was also there to greet him and show him around. 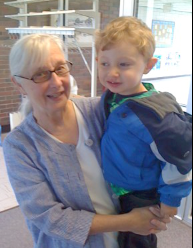 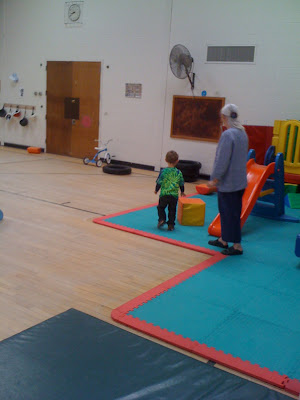 For his first day of school, Byron was wearing his new Woodstock shirt and skinny Lev'is provided by his hip New York City Uncle Jeff and Aunt-to-be Patricia. 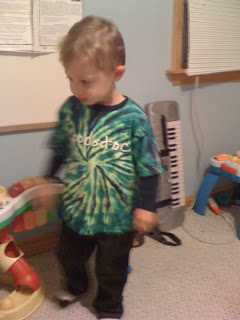 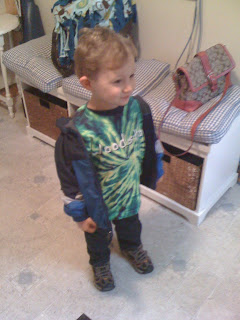 Byron has been back in Ithaca for a few days now and has been visited by his speech therapist, occupational therapist and physical therapist.  These wonderful people have worked with Byron since he was three months old.  All of them thought he his hand and arm usage was much better.  They also remarked at how much better his speech was.  Sheryl, his speech therapist, said his articulation was better, as well as his spontaneous use of words.  Kennedy Krieger is very interested in the spontaneous improvement of speech that can result from Constraint Therapy. My understanding is that the speech and tongue center is very near the arm and hand section of the brain.  When the hand section is improved, the area around that in the brain can be improved also.

Other big news - Byron begins daycare tomorrow!   He will be at the Franziska Racker Center three days a weak from 8:30 am - 4:30 pm.  He will now have much of his therapy there.  The Franziska Racker center is a large organization that has been serving people with disabilities for decades.  Byron will be in a typical daycare setting without special needs support per se, but the facility has many people there to support if he needs it.  Then on Thursday we have a meeting with the Ithaca School district to talk about Byron beginning official pre-school in January.  It's all happening so fast!

Today, Bob's car needed some major work on the wheels and also needed two tires replaced.  We decided to walk there to pick up the car.  Believe it or not, there is a major commercial thoroughfare with Home Depot, Goodyear etc, at the foot of a beautiful state park walk.  We haven't taken this walk in quite some time and the fall colors were beautiful. 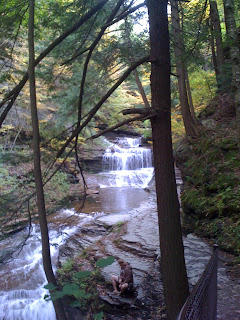 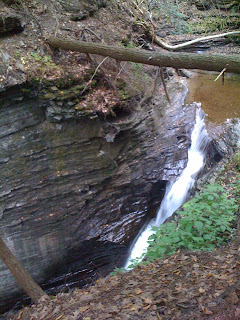 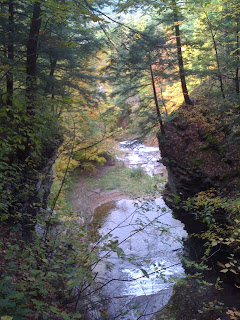 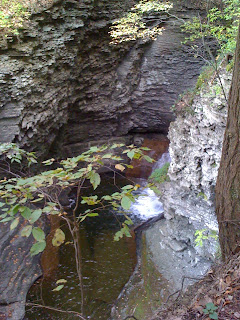 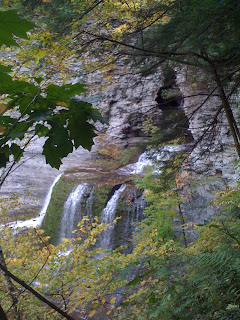 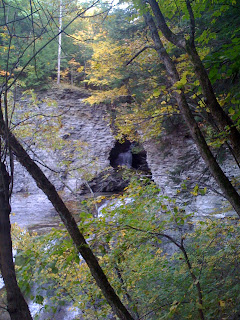 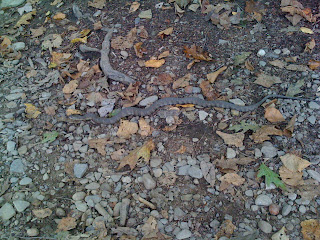 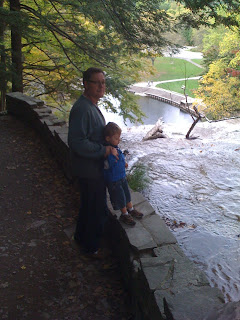 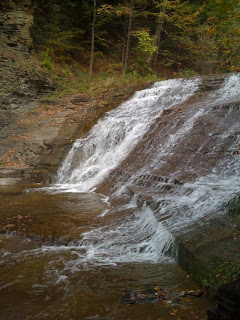 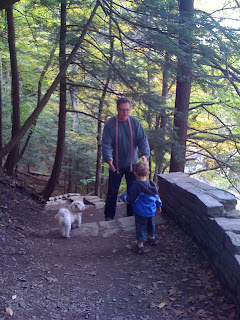 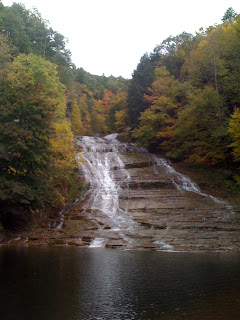 A wonderful trip.  Great to be home. More another day!
By Denise Thomas Pratt - October 01, 2009 No comments: