The last time Byron, Bob and I were out in a crowd of people was Sunday March 1 for the Washington Heights 5K (3.11 miles) run in New York.  Byron ran it with his brother Ryan and finished it quite respectably. 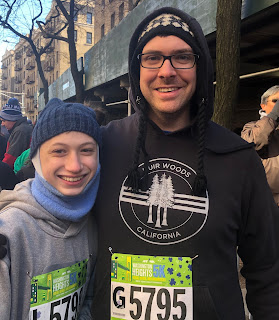 And then the pandemic began in earnest.

As we quarantined at home, even though it was relatively cold outside, I encouraged Byron to continue his running training.  Byron had mentioned that he might want to run track next year at school so training would be important. Every few days Byron would go out and run with the dog. One day I went with him.  I found out his “training” consisted of running full speed for about 100 yards and then stopping.  I knew that if another 5k or longer was in his future, we needed to develop a proper training regime.

I found an app called C25K which stands for “Couch to 5k.”  It promised to get you from sedentary to running a 5k in 8 weeks and what’s more, it was free!  I decided to not only encourage Byron to do the program, but that I would do it as well.

I ran track while in school but always the fast, short sprints.  I had tried to take up longer runs many times, but like Byron, I would run for 100 yards and then give up.  Now I was going to give it one last try.

Byron and I started the program on May 1, just as we were getting the most intense cabin fever after 6 weeks of lock down.

On our first day we were both euphoric.  It was so fantastic to be outside moving our bodies under the wide blue sky and just being with each other.  If you have a 13-year-old, you know how hard it is as a parent to spend any meaningful time with them in this digital age.  So this first outing was full of win-wins.  We talked.  We walked for 5 minutes, ran for 90 seconds, walked again and on like that.  The running part was tiring, and after the short runs we were both so grateful for the walks.

Each week the training program upped the ante.  Byron and I both have apple watches so we could run the program on our watches.  The program would tell us via the watch, when to run and when to walk.  One day the program surprised us by introducing an 8-minute run in the middle of the week.  We both thought it was a mistake but sure enough, it was upping our game.  It went on like this for a few weeks. Along the way, I had many setbacks.  Not having run like this, ever, my knees ached, my ankles ached.  I almost gave up at least three times.   A couple of times we repeated a week.  Byron never seemed to have any problems and he was patient with me.  Finally, I found the right combination of knee “sleeves” (laced with some heat producing elements and mild support) and a single ankle wrap that alleviated all of the pain and discomfort.  We were now moving briskly through the program.

The eighth and last week was about to begin.  I looked at the map they were giving us for our first 23-minute run and realized that even by the end of the week, we would not really be at a 5k.  I wanted to be sure we could make it all the way.  Byron and I traced a solid 5k on the map, and at 6 am one morning, even before the app was calling on us to run such a distance, we took a leap and ran the course.  And we made it!   We ran our first 5k.  From then on, we ran without the app, and now we run a 5k before breakfast three times per week. We no longer speak on our runs, we both have our music, but we smile and cheer each other on.

One of the most rewarding things for me is watching Byron run ahead. 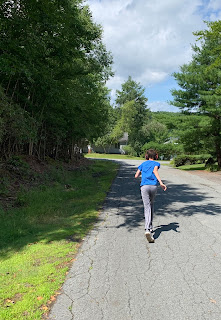 He is a bit faster than me, yet even with his slightly awkward hemipalegic gait, it is a wonder to behold.  Flashing backwards 13 years to that fateful diagnosis day, wondering if he would ever talk, walk etc, I could NEVER have imagined I would be running with my 5’7” thirteen-year-old with the deep voice.  And running an entire 5k race three times per week!

Byron continues to be a wonder and I am so grateful that he is taking us on this great journey with him.
By Denise Thomas Pratt - July 20, 2020