Showing posts from October, 2016
Show all

Another At Home EEG 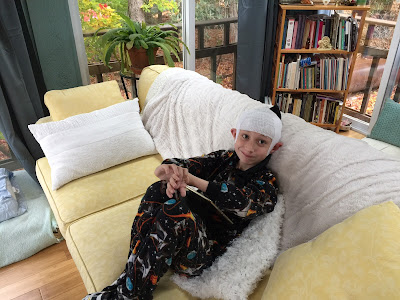 In June of 2015 Byron had his first seizure.  Since then he has only had one additional major seizure and two small ones.  He had a small seizure last week.

In the middle of the night, I heard Byron's voice calling my name in one of my dreams.  It was about 4:30 am.   I was quite certain that it had been just in a dream so I didn't check on him.  When I woke up later in the morning I said to Bob, "I wonder if Byron had a seizure, I heard him calling me."

About five minutes later, Byron ran out of his room and said "Mom I had a seizure last night!"  Apparently he was conscious but couldn't get up or speak.  I asked if he was calling out to me and he said "I was, but in my head."  I had heard him but only in my subconscious mind!   The only after effect of this seizure for Byron was a strong headache.

When Byron's neurologist learned of this recent episode she requested that he be checked again via EEG. Middletown, a town near us, has a gr…
Post a Comment
Read more
More posts