How the Brian Can Rewire after Half Removed

Popular posts from this blog 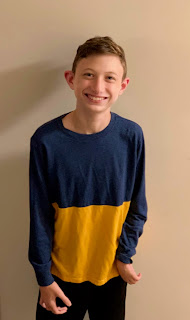 Yes Byron is seizure free, but he is also more verbal, more social, makes great eye contact and can hold a back and forth conversation with more than one exchange.  And what is most remarkable is that he can focus.  Every teacher since kindergarden  has talked about his lack of focu…
Read more 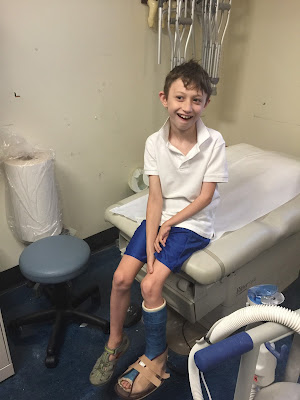 Today we went to Dr. Hyman's office at Columbia to have the cast removed.  Byron was very excited.

This is a video of the cast removal - I guess it was pretty ticklish.


This is Byron's foot after the cast was removed with the surgical scars.  A bit more gory then I imagined.  Byron didn't mind though.  He thought it was cool.

This is a video of Byron walking immediately after the cast removal.  He looks pretty good!

Byron now has to wear a removable boot for two weeks until his foot brace, known as an AFO, is ready.  The boot looks like this:

So now a boy's summer can properly begin!  Swimming lessons on Saturdays and lots more pool time.
Also, Byron will start physical therapy three times per week at the Center for Discovery to regain strength and to ensure that his newly released heel stays down and his toe stays forward.  The journey continues! 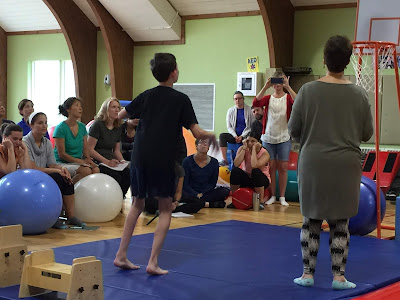 
Byron sang an excerpt from the opening of Sponge Bob the Musical at the end of the session.

Kathy was Byron's first therapist after his diagnosis.  She had been the head of the Physical Therapy PhD program at Ithaca College and had just left there because she missed working with children directly.  She was an invaluable guide, friend and mentor during the early days of Byron's diagnosis.  She was an amazing artist and we have two of her paintings in our home.  We were stunned to learned that she died from cancer in May of this year at 66.  Dear Kathy, you will b…
Read more